The Bay Area Jewish Healing Center often shares Jewish holiday packets and additional spiritual reflections with hospitals. We don’t always know what happens once we make the materials available. In one hospital, in the room of a 92-year-old man, listed at Jewish in the census, we found out. This update comes from a local hospital coordinator.

“His eyes were a bit skeptical when I showed him the Passover packet and explained where it had come from. I asked him if he’d like to open it with me.  His entire face just lit up as he pulled out one item after another. He kept saying how nice it is that the Bay Area Jewish Healing Center provides this. He had me lay out the dark blue napkin and place everything on it, on his tray table, so that he could look at it.

This patient told me about a painful history with his father who he described as a “fanatic Jew.”  He told me he left Judaism as a young man, because of his father. But the packet on that day “makes me feel like my Bar Mitzvah all over again.” We were both a bit teary eyed.” 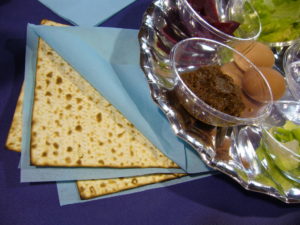 We’d love to stay in touch! Sign up below to receive occasional updates.

We’d love to stay in touch! Sign up below to receive occasional updates.